Join your fellow grads for an English Graduate Organization meeting! 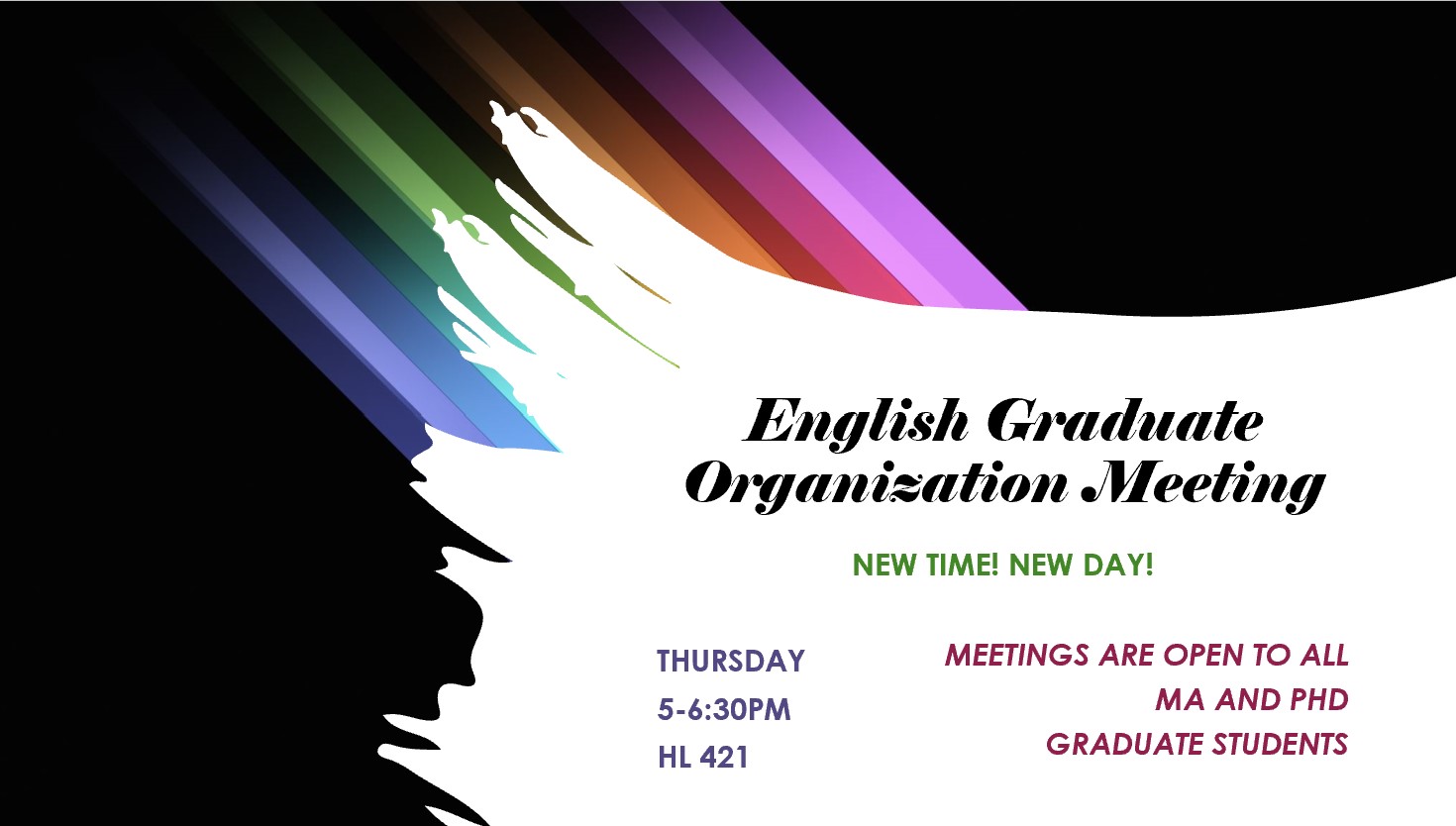 We’ll be having meetings on Thursday, for a few months at least, from 5-6:30pm. Our February meeting will happen tomorrow in HL 421.

Have concerns or questions about grad-related issues? Want to know more about department policies and procedures? Get bored around 5pm on Thursday? Join us! Everyone is welcome, everyone can attend any meeting and vote on issues that matter to us all.

Our first Theory Group meeting of the semester is rescheduled for 1pm Friday, February 14th in the English Library. Our focus for this meeting will be on Christina Sharpe’s In the Wake: On Blackness and Being.

Here’s what the publisher has to say about Sharpe’s work:

In this original and trenchant work, Christina Sharpe interrogates literary, visual, cinematic, and quotidian representations of Black life that comprise what she calls the “orthography of the wake.” Activating multiple registers of “wake”—the path behind a ship, keeping watch with the dead, coming to consciousness—Sharpe illustrates how Black lives are swept up and animated by the afterlives of slavery, and she delineates what survives despite such insistent violence and negation. Initiating and describing a theory and method of reading the metaphors and materiality of “the wake,” “the ship,” “the hold,” and “the weather,” Sharpe shows how the sign of the slave ship marks and haunts contemporary Black life in the diaspora and how the specter of the hold produces conditions of containment, regulation, and punishment, but also something in excess of them. In the weather, Sharpe situates anti-Blackness and white supremacy as the total climate that produces premature Black death as normative. Formulating the wake and “wake work” as sites of artistic production, resistance, consciousness, and possibility for living in diaspora, In the Wake offers a way forward.

When I pitched reading this to the group, it was because the concept of the wake was coming up in different places. Not only in academic setting like one of the colloquia last semester, but also in a podcast discussing generational trauma in the new Watchmen tv series. So, whether you’re interesting in this for your scholarship or just your everyday media and life consumption, it should be a rewarding read.

Since this is a fairly short text, our original idea what to try and read all of it. But, if you can’t read the whole work, Chris F. has posted chapters 1 and 4 to the group’s Google site page (https://sites.google.com/g.syr.edu/english-theory-group/home).