Our Fall Negotiations colloquium is happening next Friday, November 13, 3-5pm in CH 020. Come for the food, stay for the conversation! 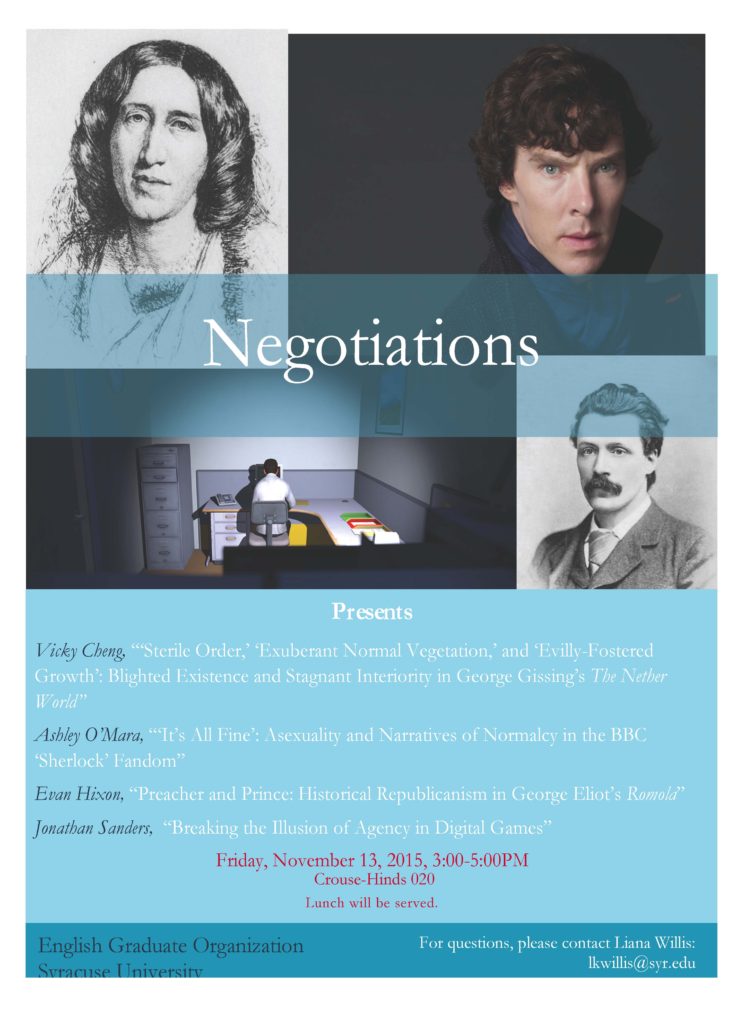 George Gissing’s The Nether World (1889) examines the pessimistic depictions of inescapable poverty plaguing the working-class poor at the end of the Victorian period, and unlike earlier novels fed upon mid-century liberal ideals of social reform and progress, the novel offers no relief or escape for its desperate characters. This paper examines what rank or elevated growths appear mapped out upon the bodies of individual characters, from what depths of interiority these physical trappings spring, and how this allows Gissing to cultivate and nurture readerly sympathies for even the most abject of the working-class poor.

Ashley O’Mara, “It’s All Fine”: Asexuality and Narratives of Normalcy in the BBC “Sherlock” Fandom

The BBC “Sherlock” fandom is home to the greatest number of asexuality-themed fan works on Archive of Our Own, the majority of which feature Sherlock as an ace character. Although moments in the BBC series resonate with writers of ace fic, encouraging this queer interpretation, I plan to argue that the BBC series’ narrative of reforming and normalizing Sherlock’s antisocial eccentricities organizes fan writers’ narratives normalizing (and often reforming) Sherlock’s asexuality, often vacating its queer potential.

This essay examines George Eliot’s Florentine historical romance Romola and attempts to place its Victorian liberal politics into dialogue with the republican ideals held by the key historical figures that Eliot makes central to the novel’s plot.  Particular attention is paid to the works of Father Giraloma Savonarola and Niccolo Machiavelli, who both figure centrally in Eliot’s presentation of the end of the Italian Renaissance and whose writings, I argue, become central to Eliot’s vision of a unified Italy in light of the Risorgimento.

Jonathan Sanders, “Breaking the Illusion of Agency in Digital Games”:

Although many modern video games are based around the idea of open-world exploration and freedom of choice, true human agency is an analog concept, unable to be fully realized within a digital world. Rather than hide from this limitation, some games use particular techniques to call attention to the illusion of agency to make particular points about players, games, and the “real” world. These so called “subversive moments” focus on engaging a player’s deep attention rather than problem-solving hyper attention, disempower rather than empower a player, and provide feedback in order to cue the player into the significance of the moment. The Stanley Parable (2013) provides an excellent case study for observing these moments in action through its commentary on the unrealistic expectations of players and the dark humor that arises from it.